Tell us about yourself and Contraste?

I am Luc Vandergoten, General Manager of Contrast Consulting, a subsidiary of the Contraste group, which has around 400 people working in Belgium, France, Luxembourg, Switzerland and an offshore centre in Tunisia. We have four main activities: 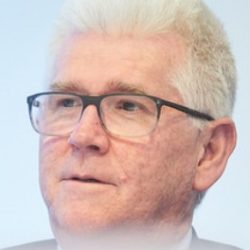 How has your career progressed at Contraste? How did you get to the position of General Manager?

I’ve had a long career! I started in 1985 as a developer, and then quickly became a project manager and then became part of the management team. I worked in another company for 18 years, and then I ran my own company, BTR, for 10 years which was taken over by Contraste in 2016 and since then I have been with Contraste. At the same time, I’m also active at Agoria as chairman of the “Financial Services Technology Club” and member of the Management Committee of Agoria Brussels.

Do you remember the first contacts you had with mic.brussels?

I came across the mic.brussels internship opportunities via Agoria and found it interesting to have an intern who was supervised, selected and motivated. Together with our first intern, we developed a kind of framework that made it possible to quickly make web screens, which is the basis of the .NET framework. It is now used by several customers and we have also developed some other solutions with this framework.

Considering the success of this first internship experience, we decided to try the experience again and, for five years we have worked with 15 interns in total and have hired most of them. We try to establish continuity between the new interns and the old ones who have continued their journey with us because they are the ones who know the reality of the internship best and can therefore better support them.

So what is the main interest of the programme for you? Recruitment of people with good profiles? Yes, recruitment is important, but for me it’s all about innovation. Each year, we have to find something the interns can work on and which must be interesting for them but also useful for Contraste itself, which forces us to constantly innovate.

The advantage is that we can give research activities with a very clear objective to motivated young people and therefore the result is that we have Proofs of Concept (PoC) that work at the end of the programme, regardless of the technology (IoT, chatbots, facial or voice recognition, etc.).With these PoCs, we then try to find customers who are interested in the project to bring it to the product stage. And I must say that all the steps we have taken so far have been implemented and used by customers.

Is it true that through the internship programme, you created a start-up at the time?

Yes, indeed, with Maxime, our first intern, we created “PaperlessOffice.com” and did a crowdfunding where several people invested. The solution was based on Microsoft Azure via 365 and allowed a company to be managed over GSM.

Unfortunately, we were attacked by a company that felt it was unfair competition and we had to stop even though we had early customers and it was working well. I’m sure if the project had continued we would have had millions of users because now, five years later, there are several companies that have done similar projects.

Do you have anything to say to businesses and people looking to get into tech in 2021?

You have to have clear objectives, that’s for sure. With the years and the projects that I have launched, I have also learned that when you make a Minimum Viable Product (MVP), you shouldn’t make a product that tries to do everything to be able to respond to any customer question. By taking a working MVP, you can launch a product and then find customers and only then add the requested features. The best example of this is Microsoft. They launched Teams, a service that initially fell short of the quality of its competitors. Today, they have made a lot of changes with their tool and they also have, I think, the majority of users. This is the lesson people new to tech need to understand: an MVP, as the name suggests, obviously has to work but doesn’t have to have all the features straight away.

In addition, when we embark on such an adventure, we must ensure that alongside the technician, there is also a hardcore sales person who only sells the solution and is not interested in the technical side of the product.

A word for the 10th anniversary of mic?

I am very happy that there are initiatives like mic!First of all because there are never too many initiatives aimed at young people to give them chances and opportunities to develop and start their careers. Then, mic also supports start-ups and I have often participated in their project presentation sessions which demonstrate the enthusiasm of these people, who throw themselves into entrepreneurship without necessarily knowing where it will lead them. It’s good that there are organisations channelling this enthusiasm. In the past, there were fewer support structures. So it’s great that mic is now taking this on, making sure that people can come together to exchange ideas and be supported by an organisation.

Interview with Cécile Jabaudon, Operational Director of the MIC Brussels

Discover the role that the Boostcamp played in the development of Esperity!

A summer program to understand AI